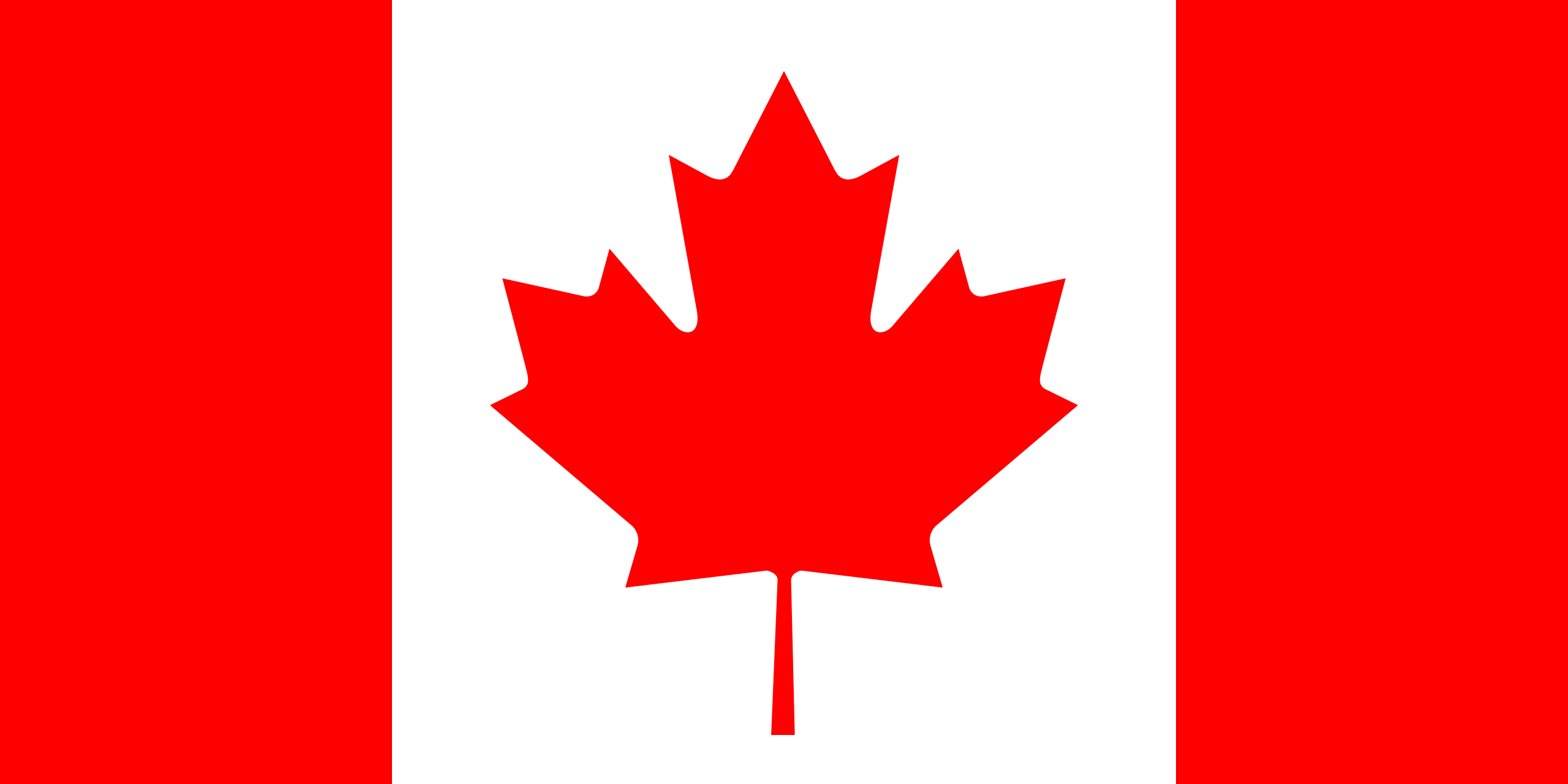 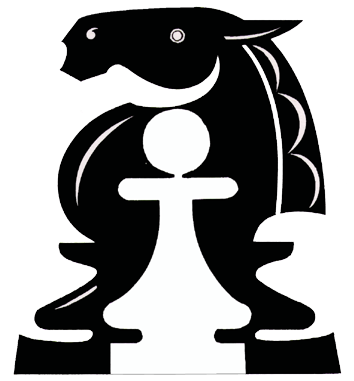 FOR THE EIGHTH CONSECUTIVE YEAR 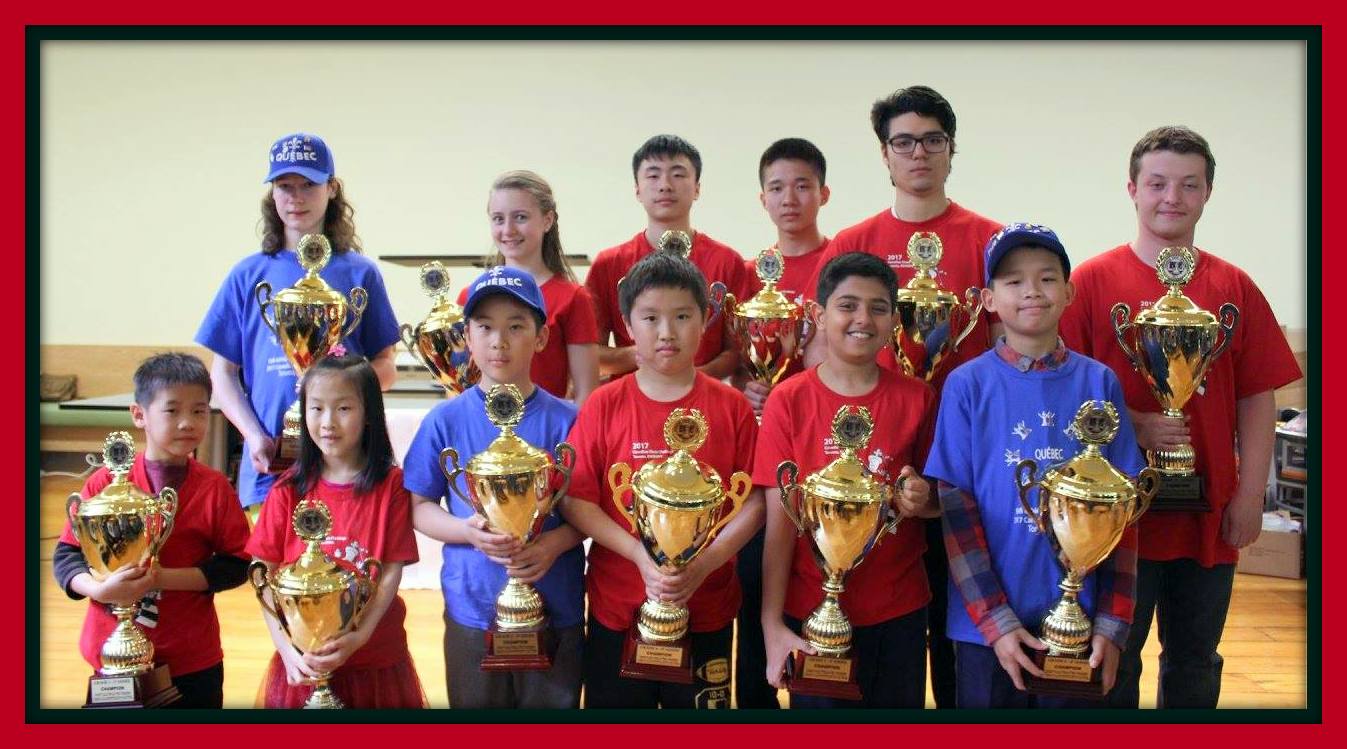 120 provincial champions, 12 per province, gathered at the University of Toronto, in Ontario, on Victoria Day weekend for the ultimate school competition of the year: the Canadian Chess Challenge, a tournament organized by the Chess’n Math Association which aims to proclaim the national champion by grade.

The Chess'n Math Association hosted this 29th edition and received the representatives of each province like true champions. Among the competitors, there were four experts, seven Canadian masters, five FIDE masters and for the first time ever at the Canadian Chess Challenge one grand master. GM Razvan Preotu from Burlington, Ontario, won four Canadian titles in 2008, 2009, 2010 and this year in 2017 with a perfect performance!

After a day of festivities, (visit at the Ripley's Aquarium of Canada, simultaneous with GM Razvan Preotu, banquet and the traditional blitz), the players were finally ready for the big moment.

The tournament began on Sunday morning with the official entry of the ten teams. Under the sound of bagpipes, the teams marched into the hall carrying their provincial flags. Following the national anthem, the players shook hands and played their first move. 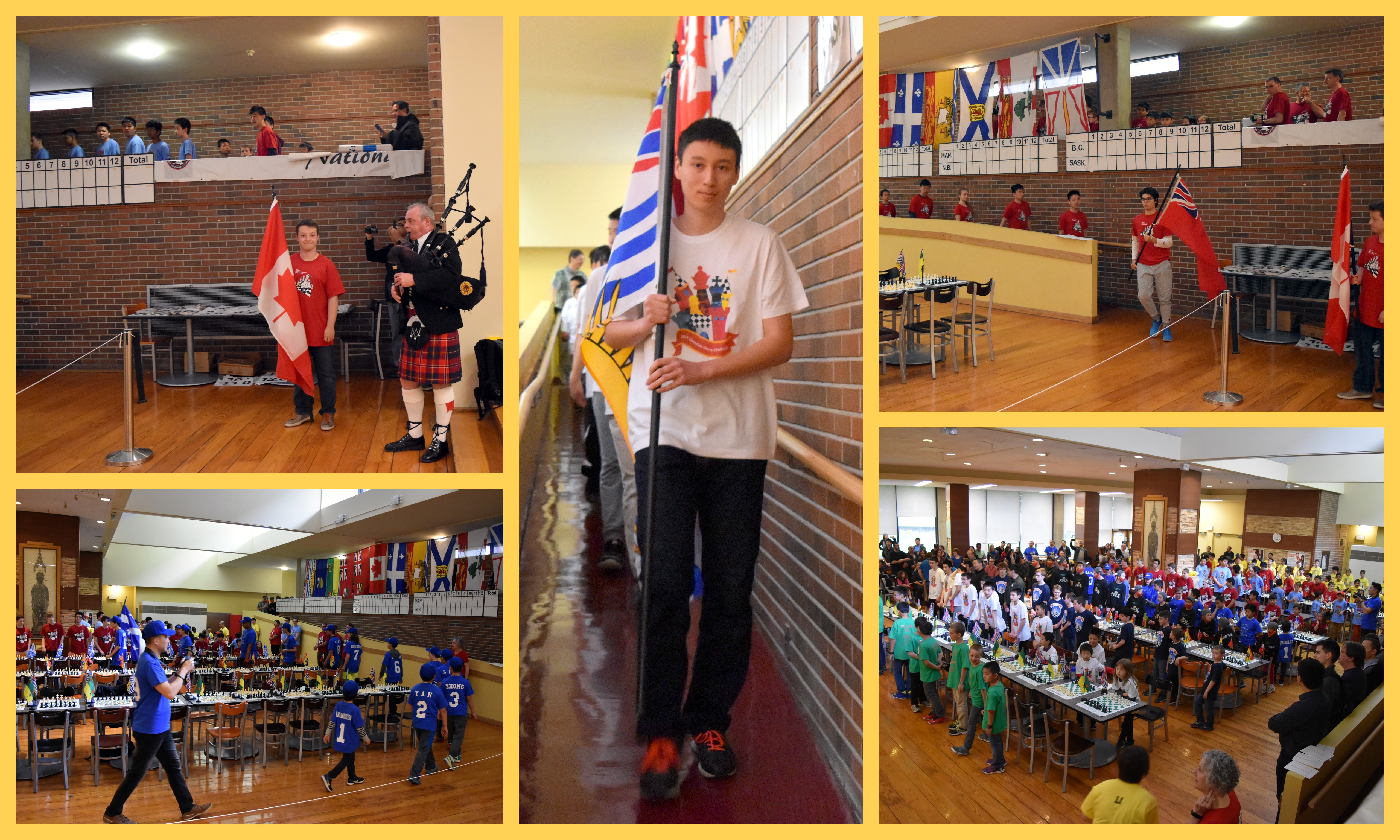 The teams make their entrance

For the past eight years, the Ontario team has continued to reign. The traditional scenario was about to happen again. Team Ontario and team Quebec, these two great teams, had together 11 players rated between 2120 and 2678. What a force!

As in previous years, from the first to the eighth round, Quebec and Ontario were side by side with eight points and won all their matches. And as usual, the top two teams competed in the ninth and final round. As they sat down, the Quebec players knew that they had to win the match to win the tournament; a draw would not suffice because Ontario had picked up more individual points.

Ready to fight, the Quebec team realized their faith soon in the game. The game ended by a score of 9-3 in favor of Ontario. One of their best performance! The Ontario team collected 10 medals, including 9 golds tying their record of 2001 for the most gold medals, while Quebec brought home 8 medals, including 3 golds. 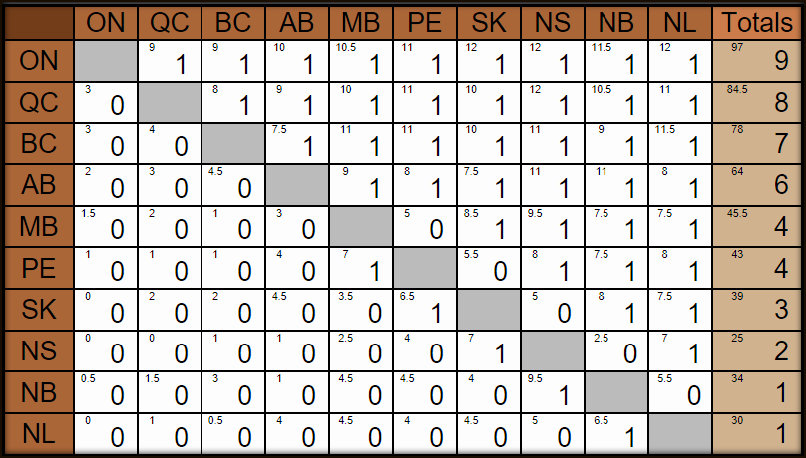 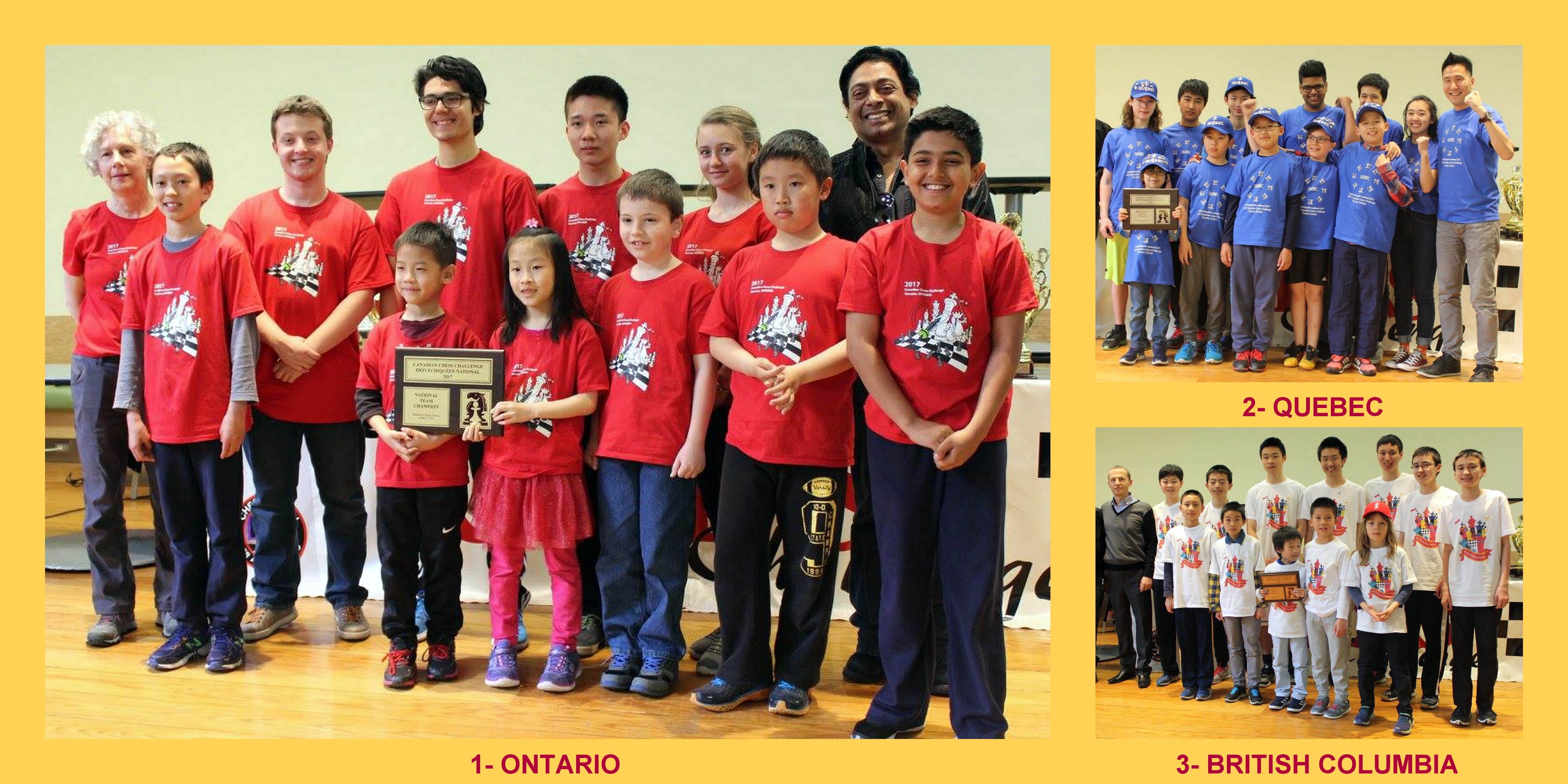 British Columbia finished in third place earning 6 medals, winning all their matches with the exception of Quebec (8/4) and Ontario (9/3).

Alberta came in fourth place with six wins, losing only against the top three teams. They took home 6 medals tying their own record for the most medals.

But what about the performance of Manitoba who finished in the top 5, the last time was in 2012, and Saskatchewan who tied their own record of 3 medals!

Prince Edward Island is the Most Improved Team of the competition jumping from 10th place to 6th (tying for 5th), first team to ever jump more than three places. They scored 20.5 points more than last year, which is the second biggest increase ever. PEI, the Top Atlantic Team, also won 2 medals, one in grade 6 and the other in grade 8 where Kevin Bu tied for first but lost in the playoff.

The battle for the top: 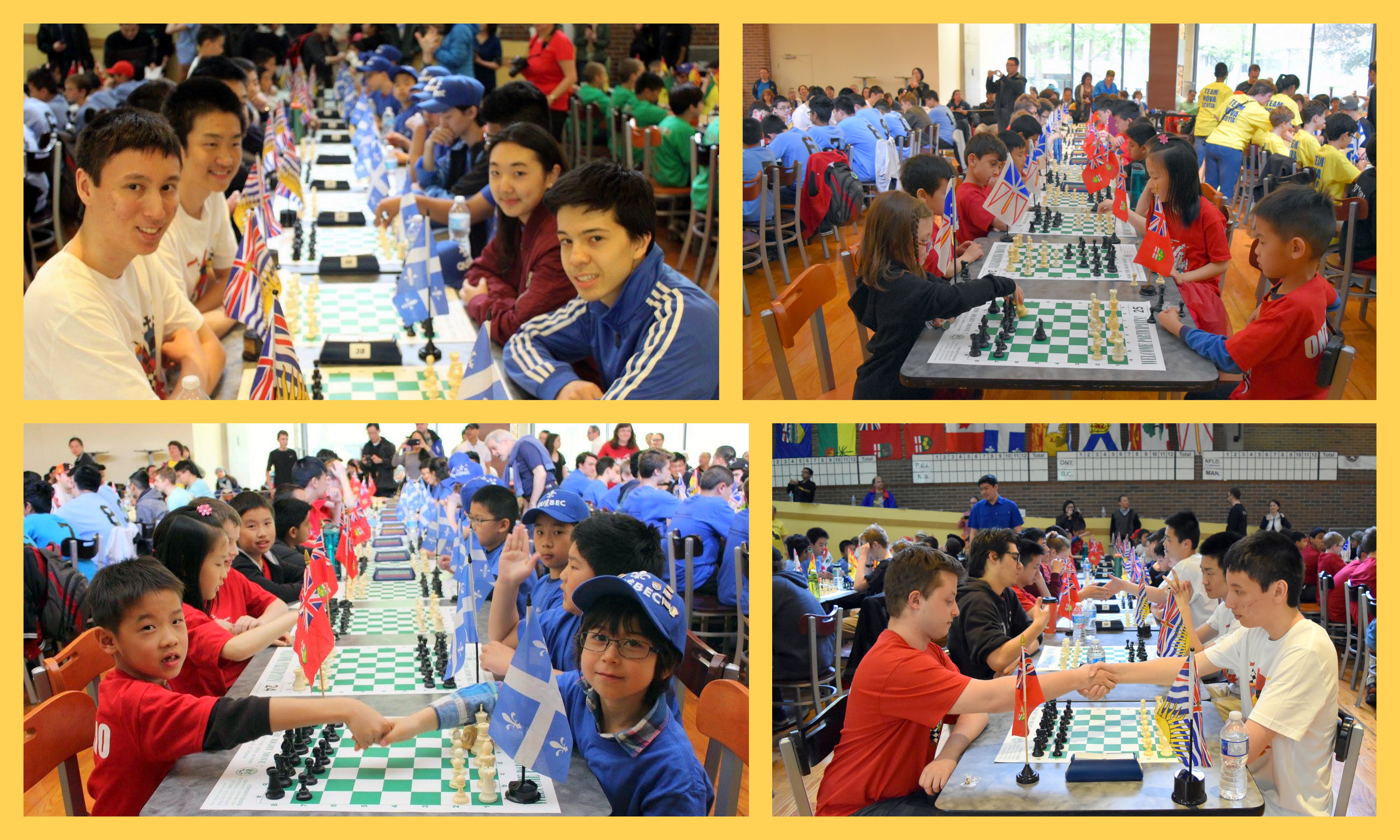 Five players had a perfect score of 9-0 and four of them belong to the Ontario delegation. Congratulations to Greta Qu (ON, Grade 2), Max Chen (ON, Grade 4), FM Shawn Rodrigue-Lemieux (QC, Grade 7), CM Richard Chen (ON, Grade 10) and GM Razvan Preotu (ON, Grade 12) for their amazing performances!

​The Most Valuable Player Award, given to the player who scores the highest percentage of points on their team, went to Sam Song from New Brunswick (grade 11). In his case, he scored 23.5% of his team's points. Wow!

​11 girls participated in the tournament! Just like 2013 and 2014, two of them were victorious: Greta Qu (Ontario, grade 2) and Svitlana Demchenko (Ontario, Grade 8). Also among the prizewinners were Abigail Sorgard (Saskatchewan), who placed third in grade 1. Go girls! 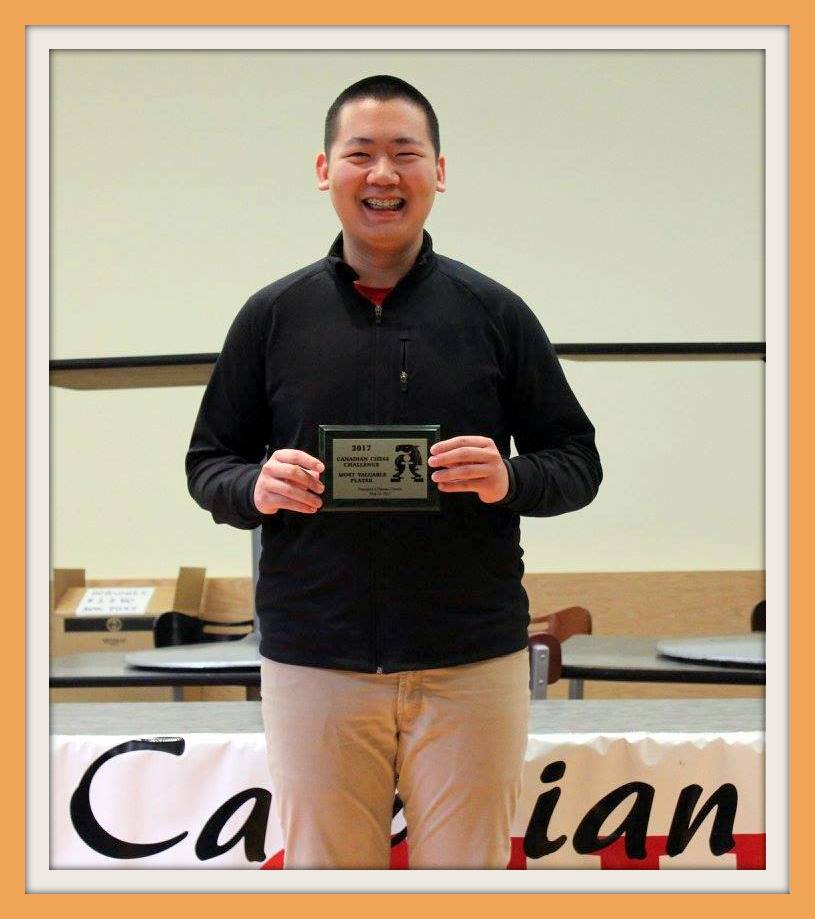 The winner of the Best Team Shirt contest was Prince Edward Island with a giant mean shark representing their province. It was followed by Manitoba and Nova Scotia. The $350 prize was divided between the three provinces. 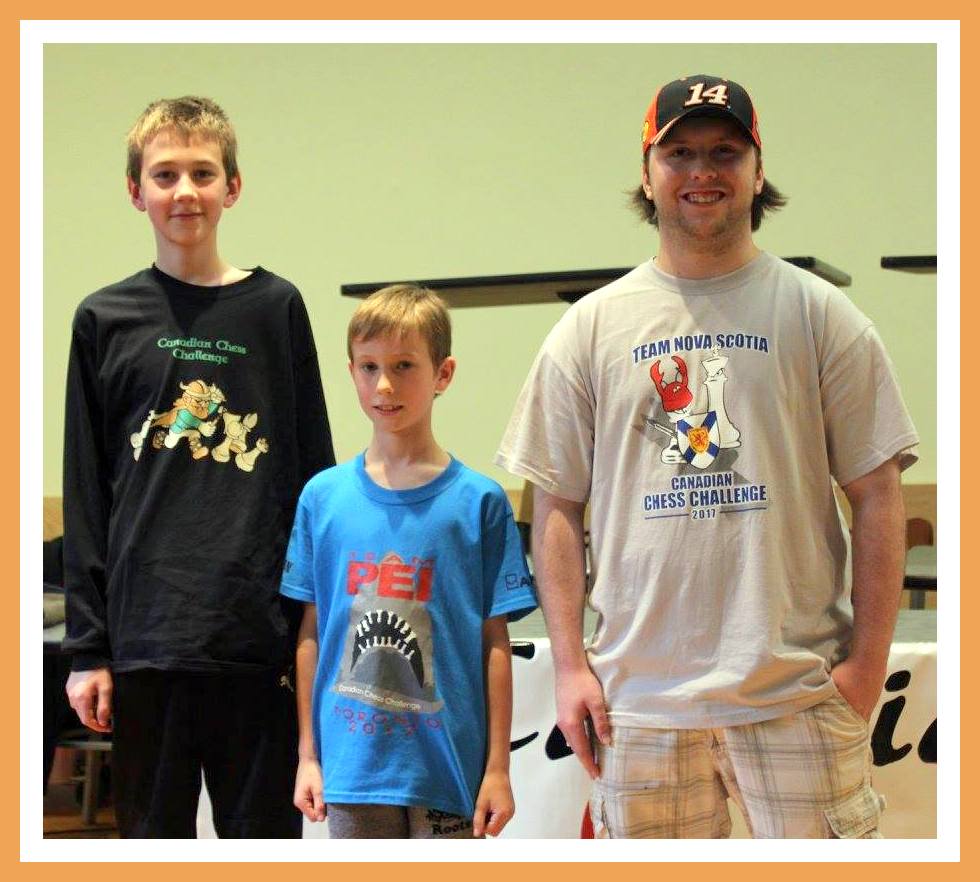 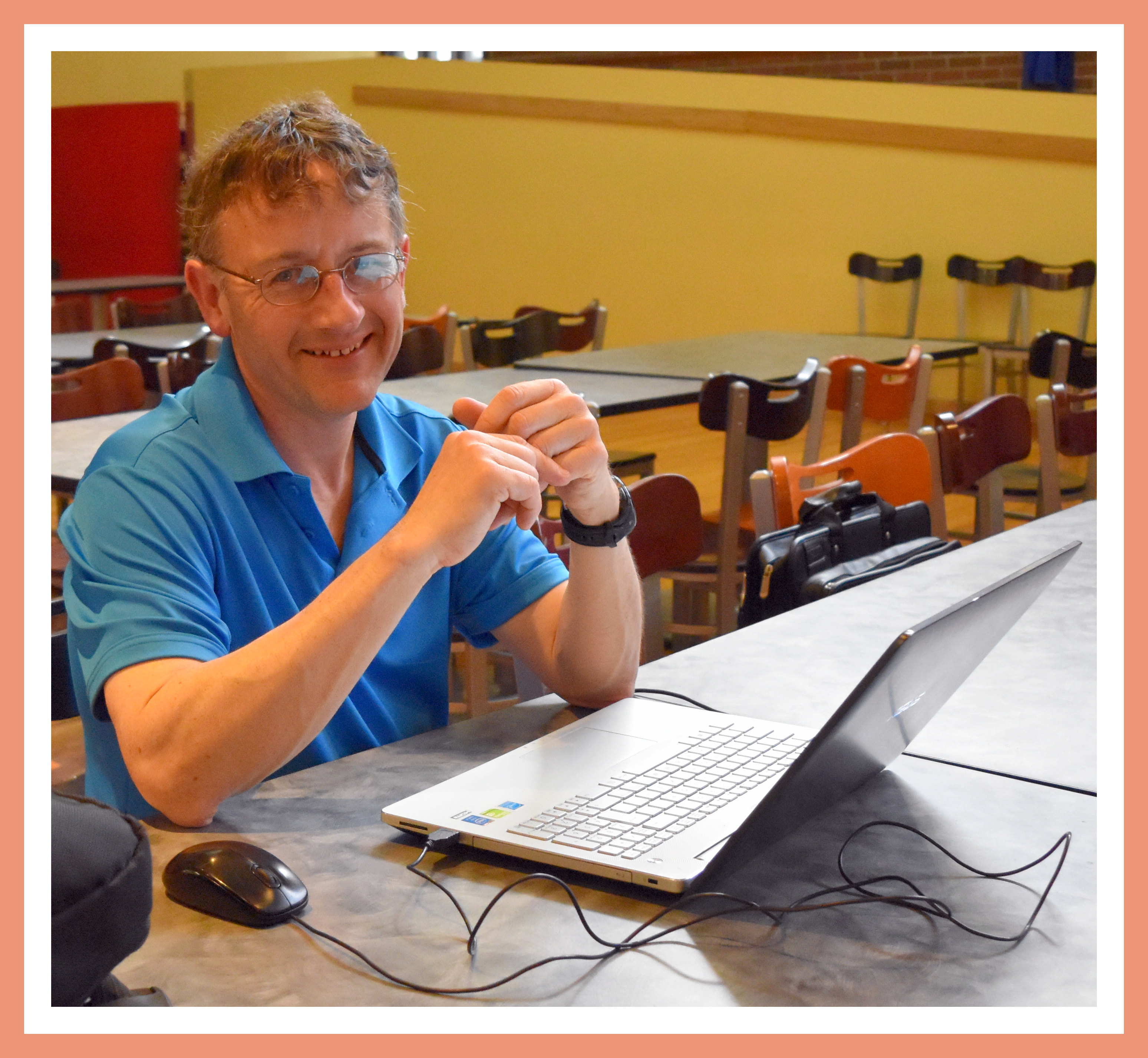 
Here are the top 5 in each grade: 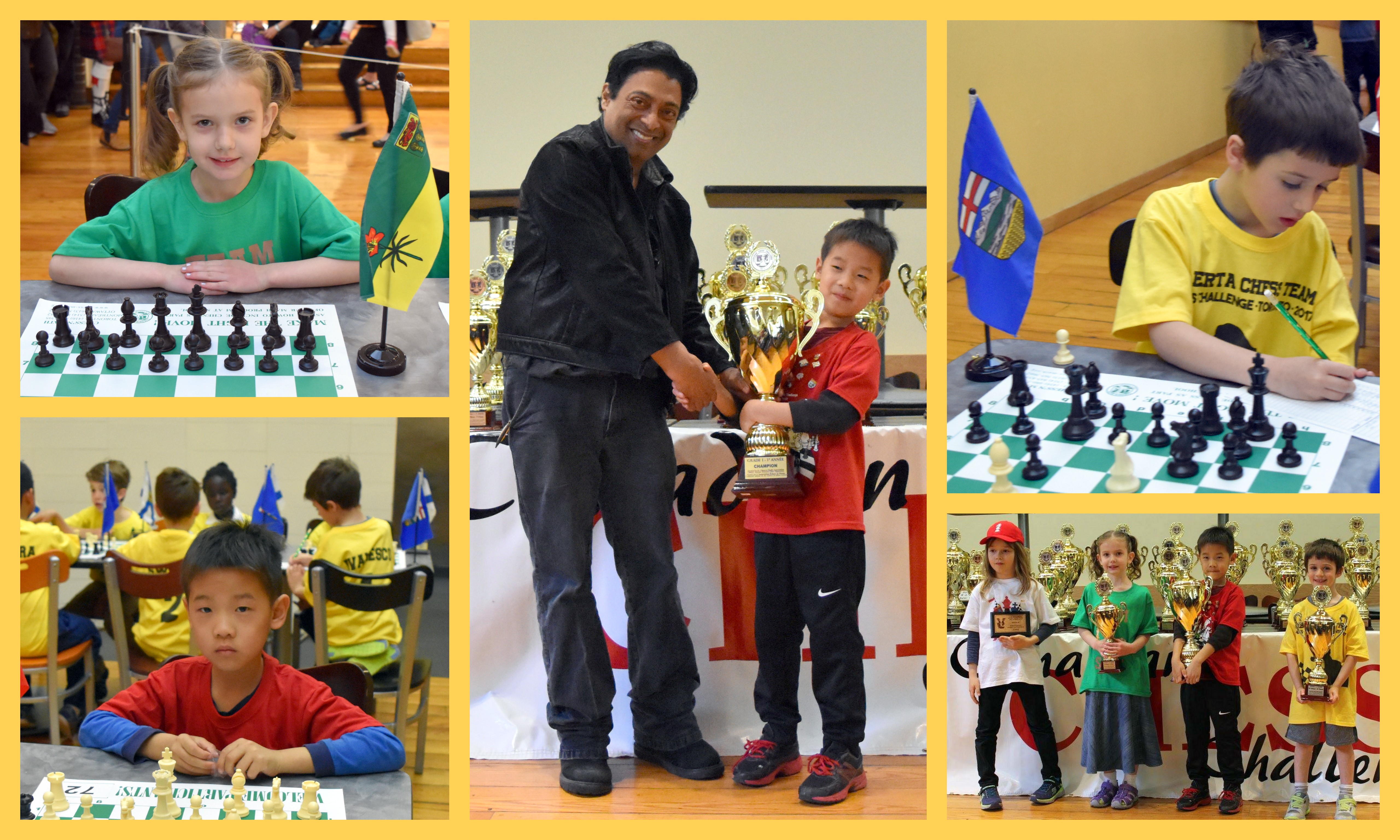 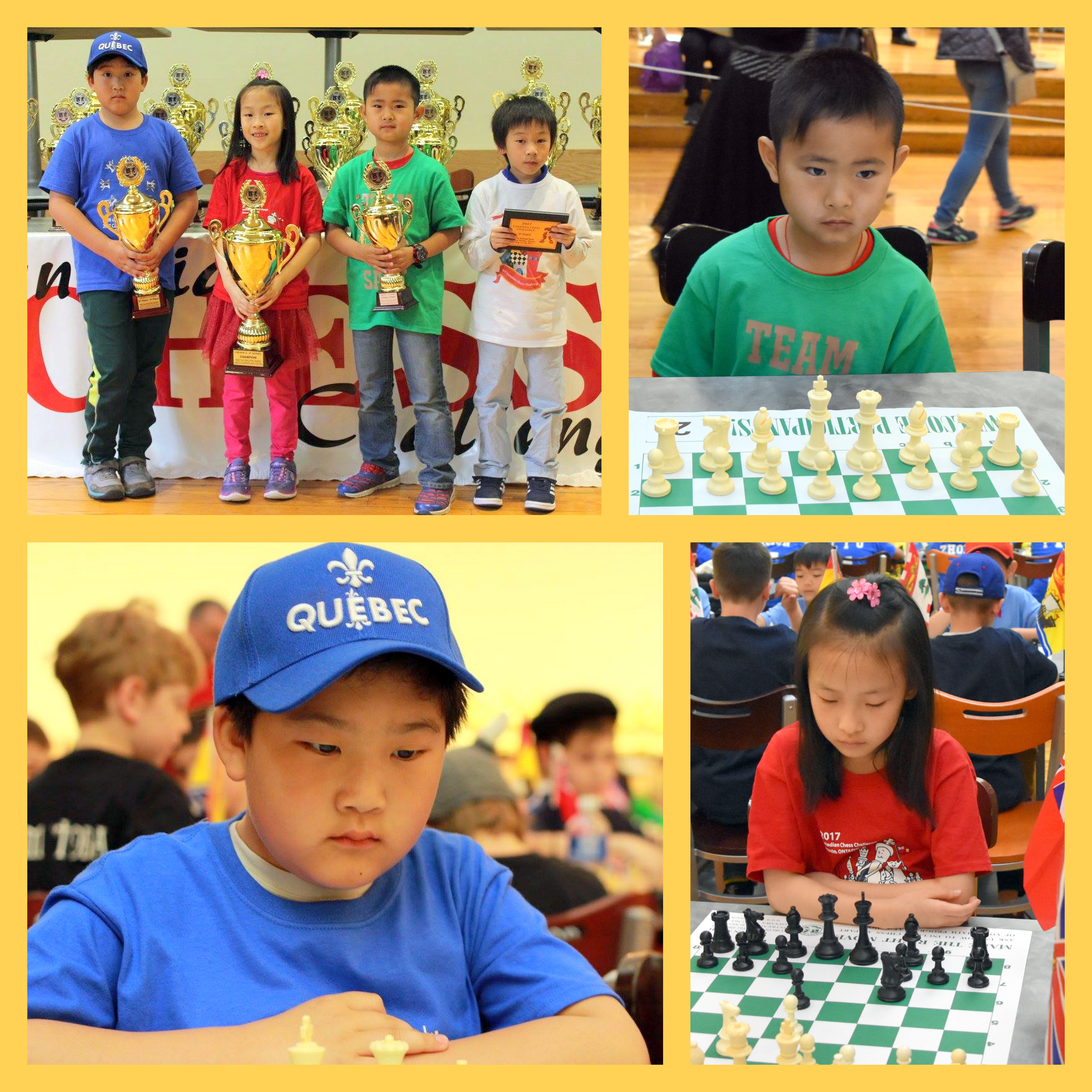 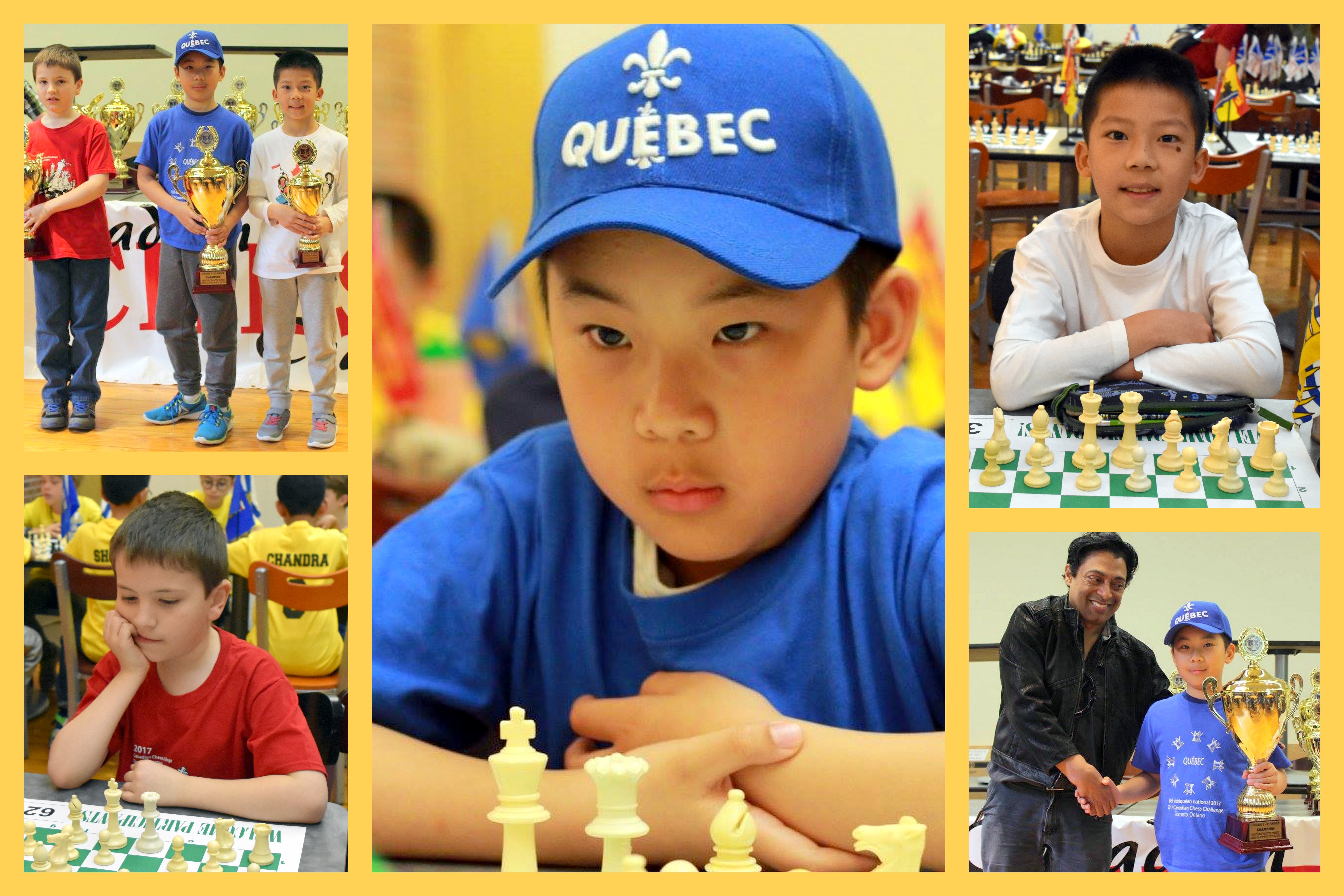 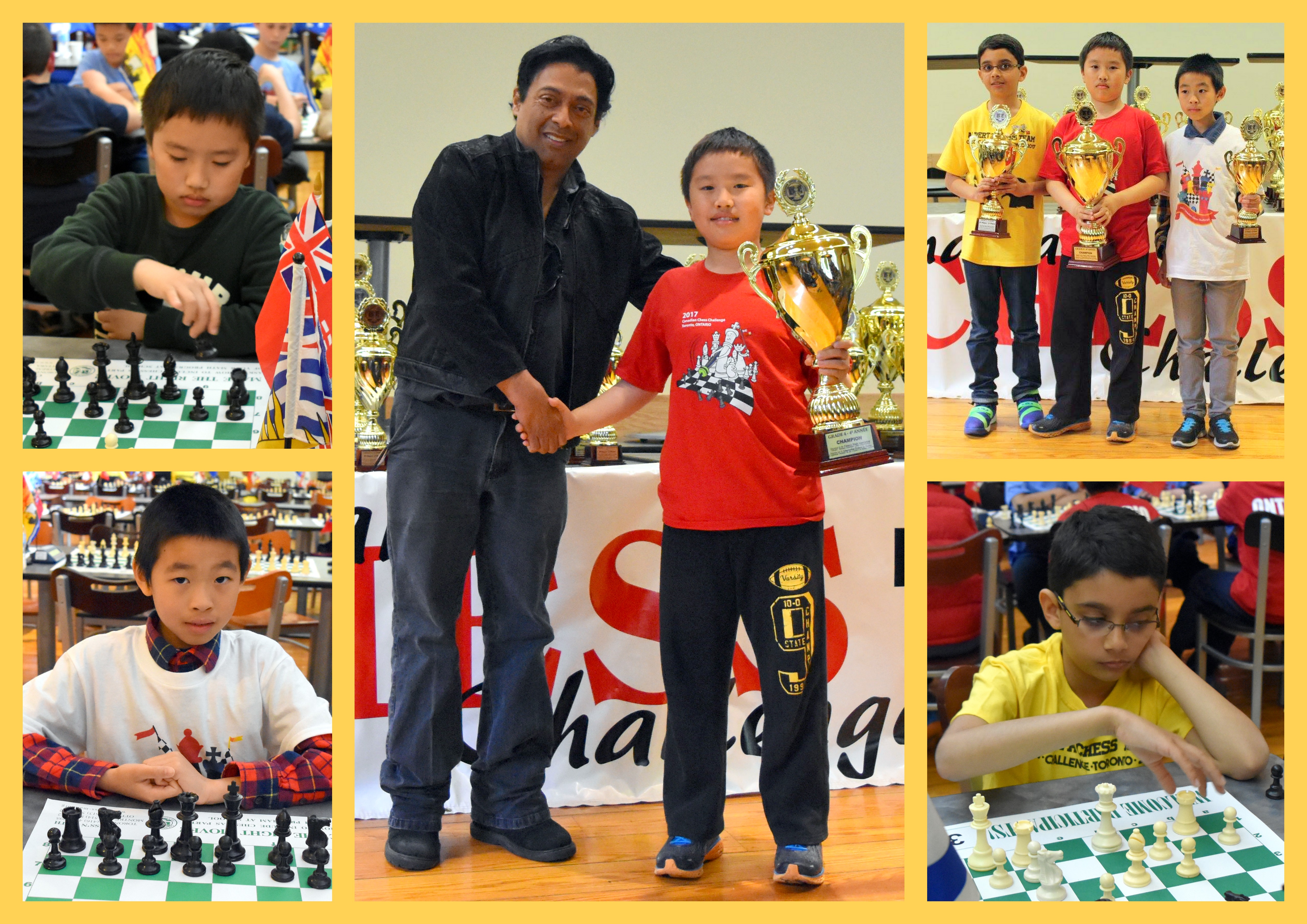 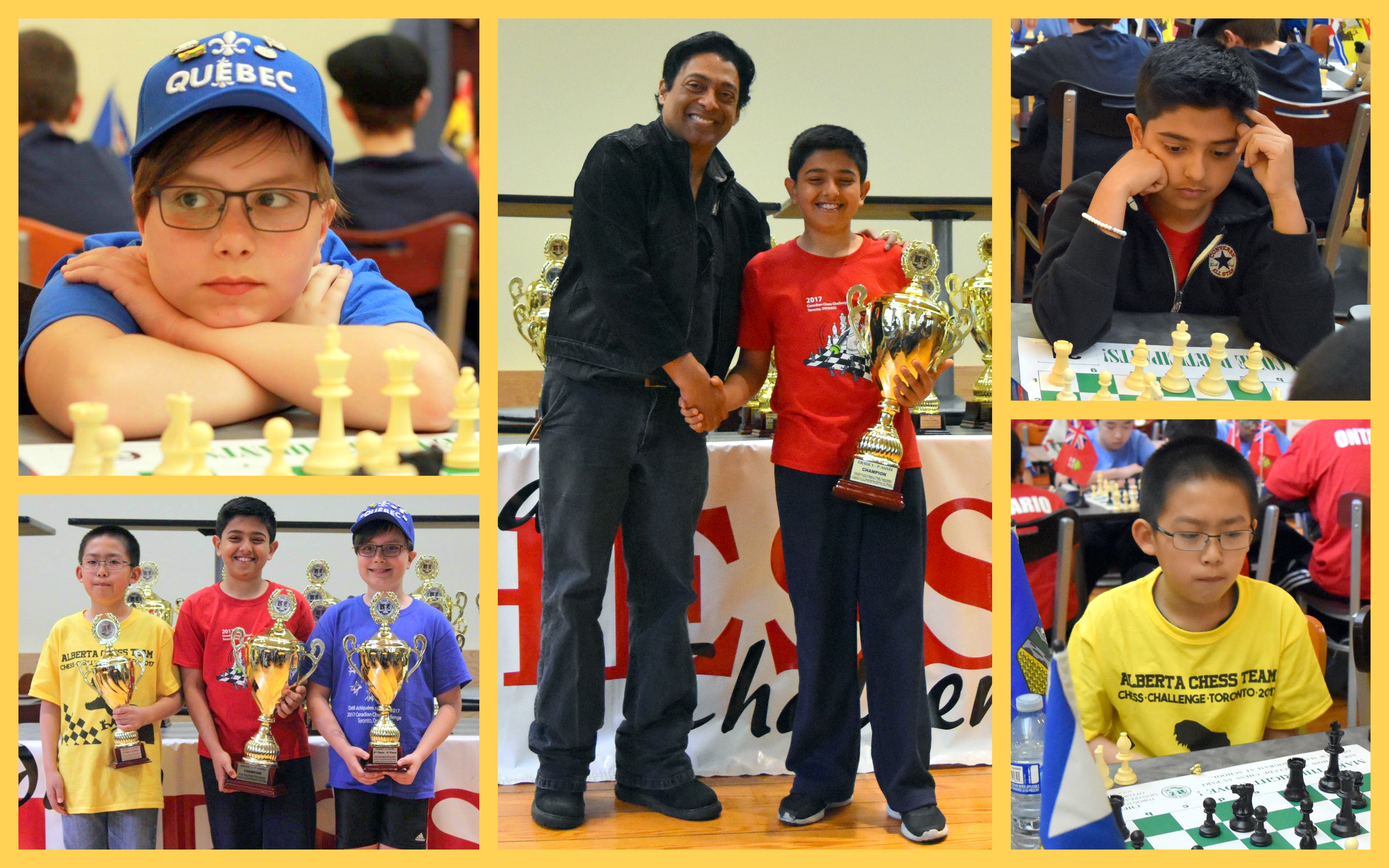 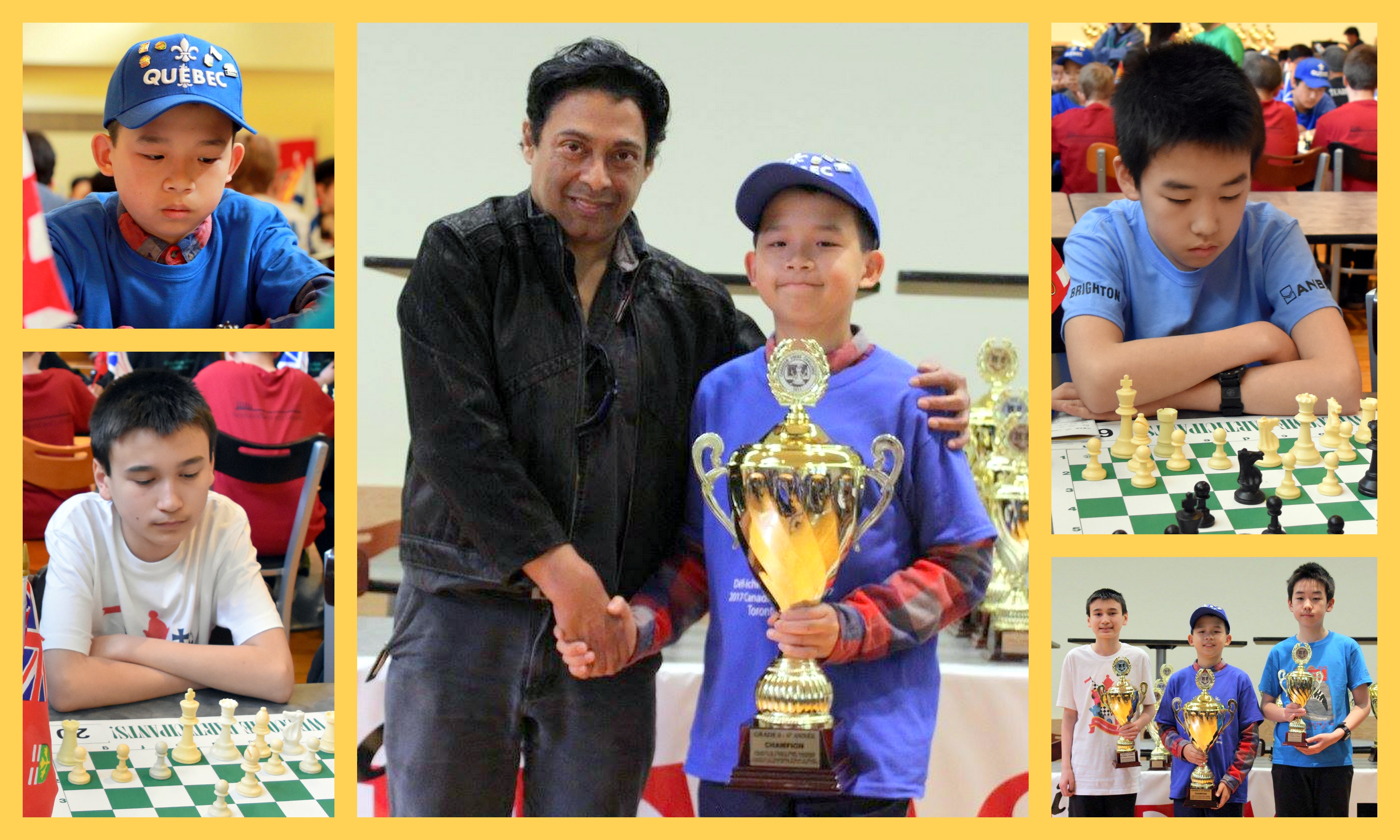 ** Did you notice the beautiful pins on Qiuyu's cap? At the National, the players exchange pins from their home province, it's a tradition. 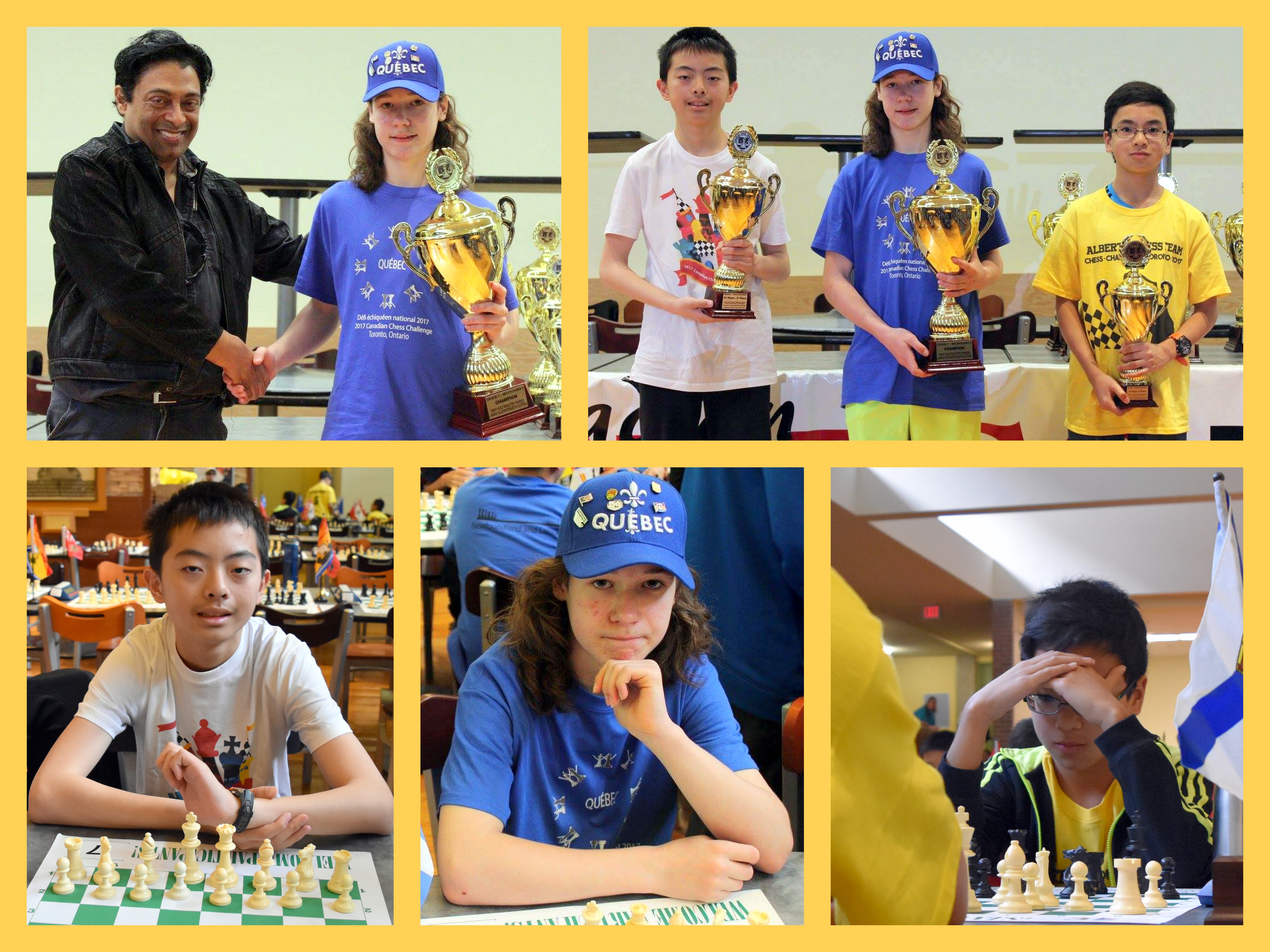 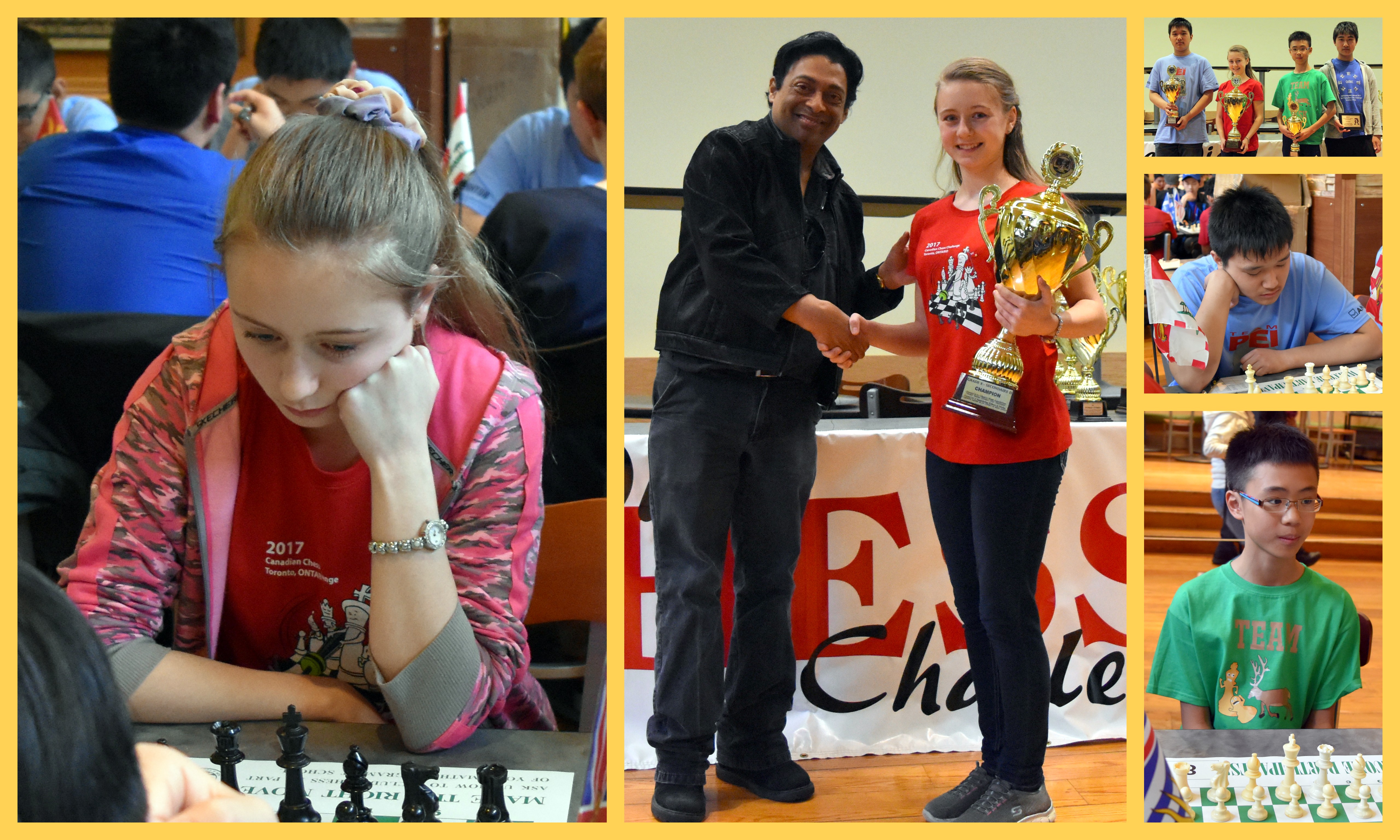 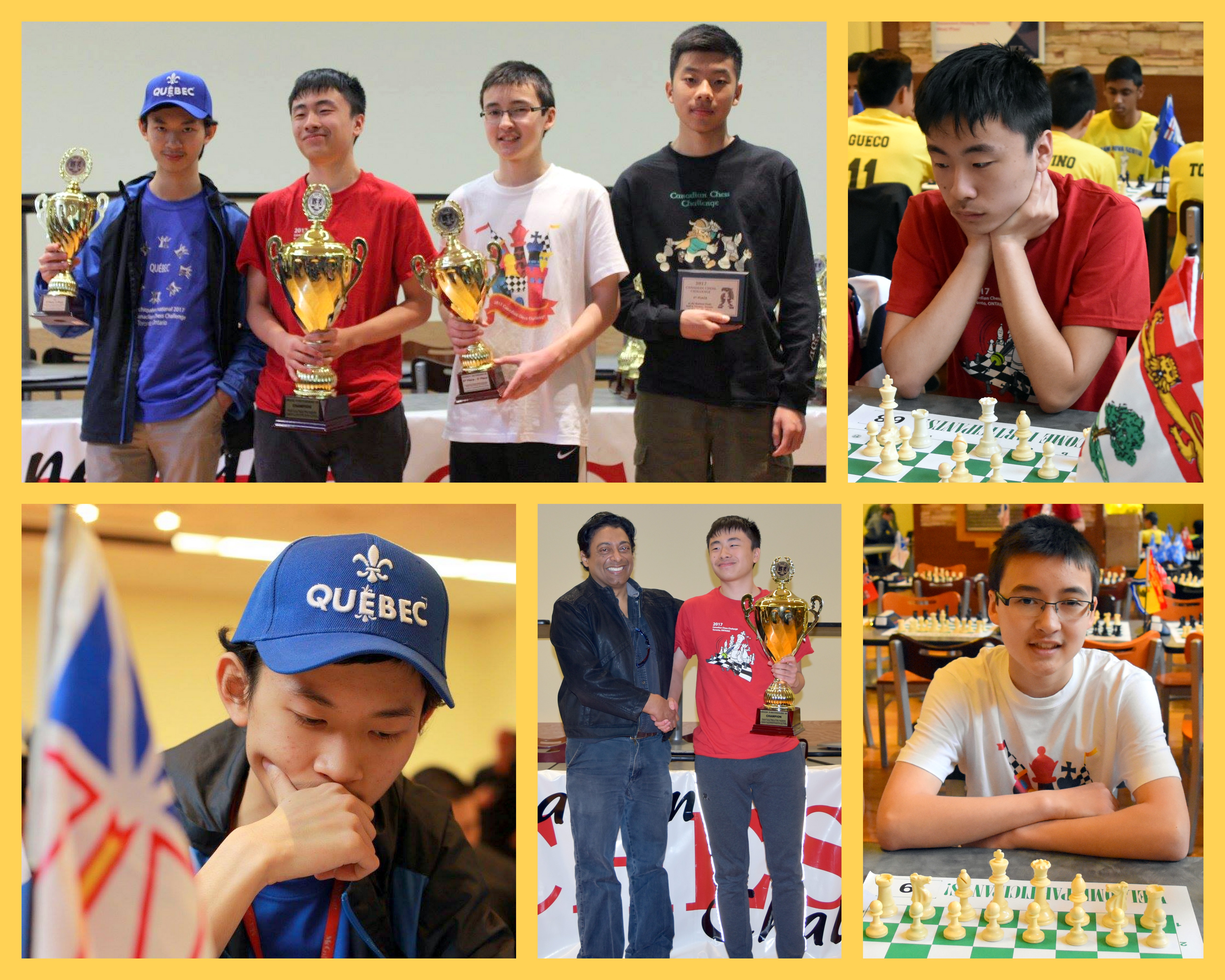 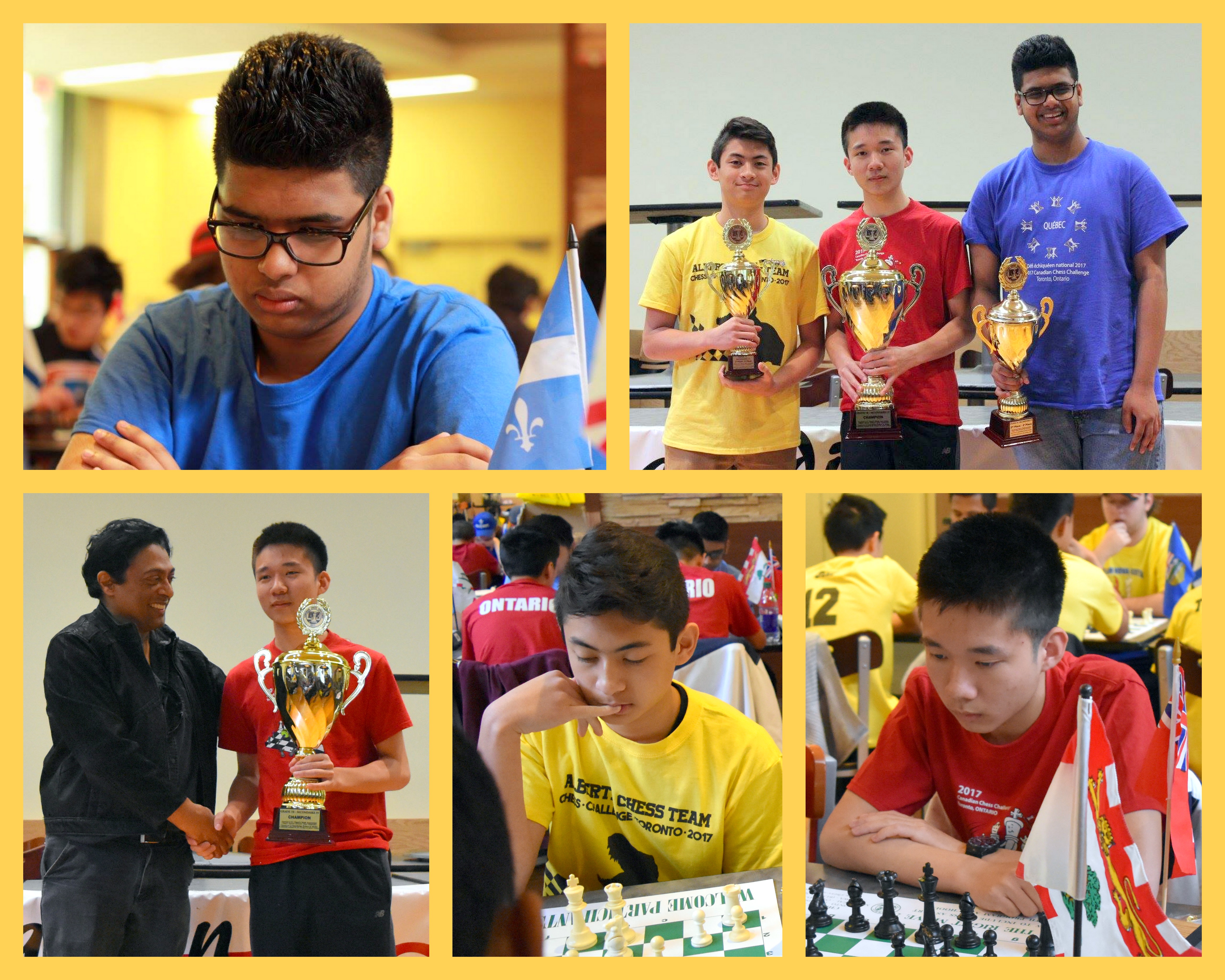 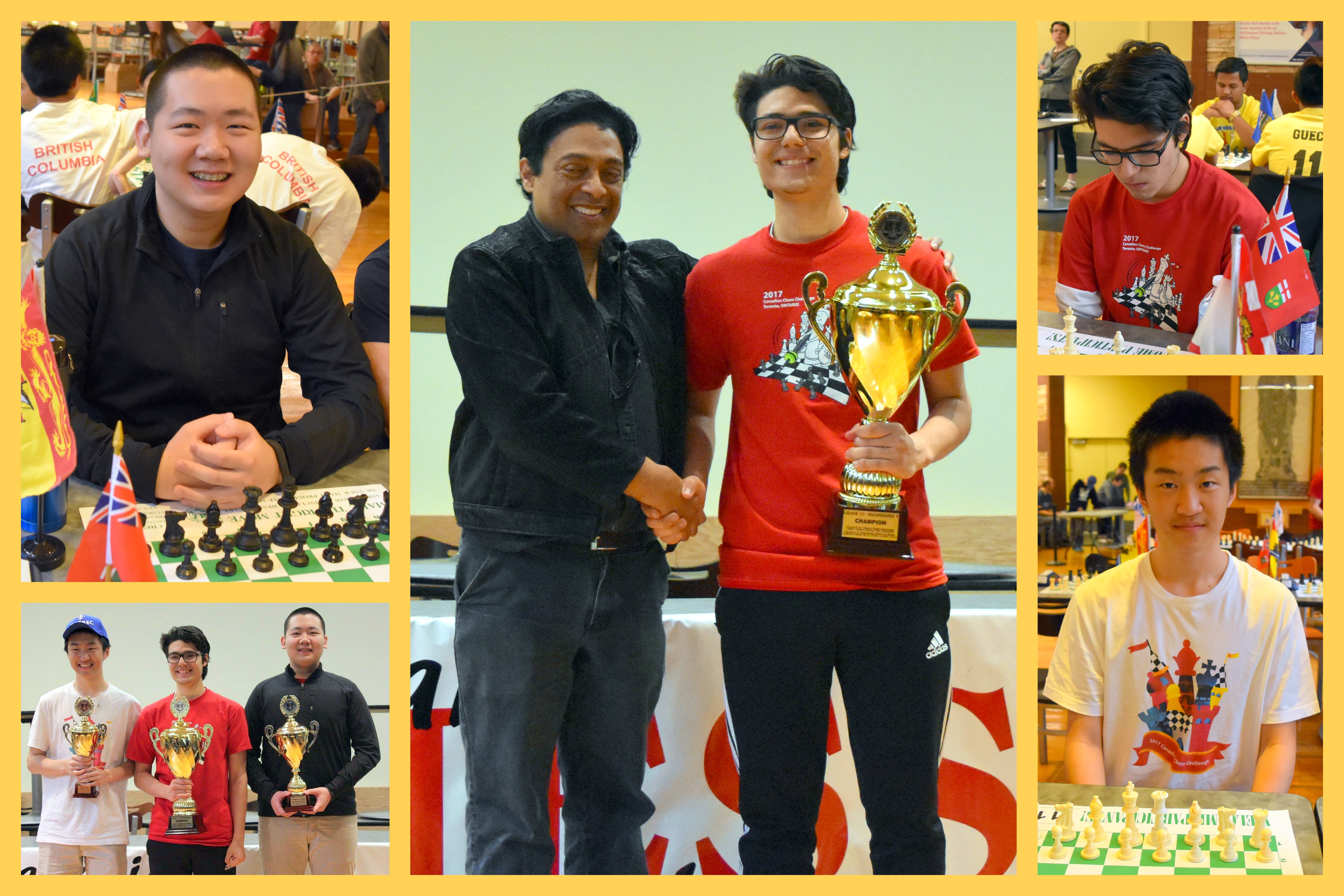 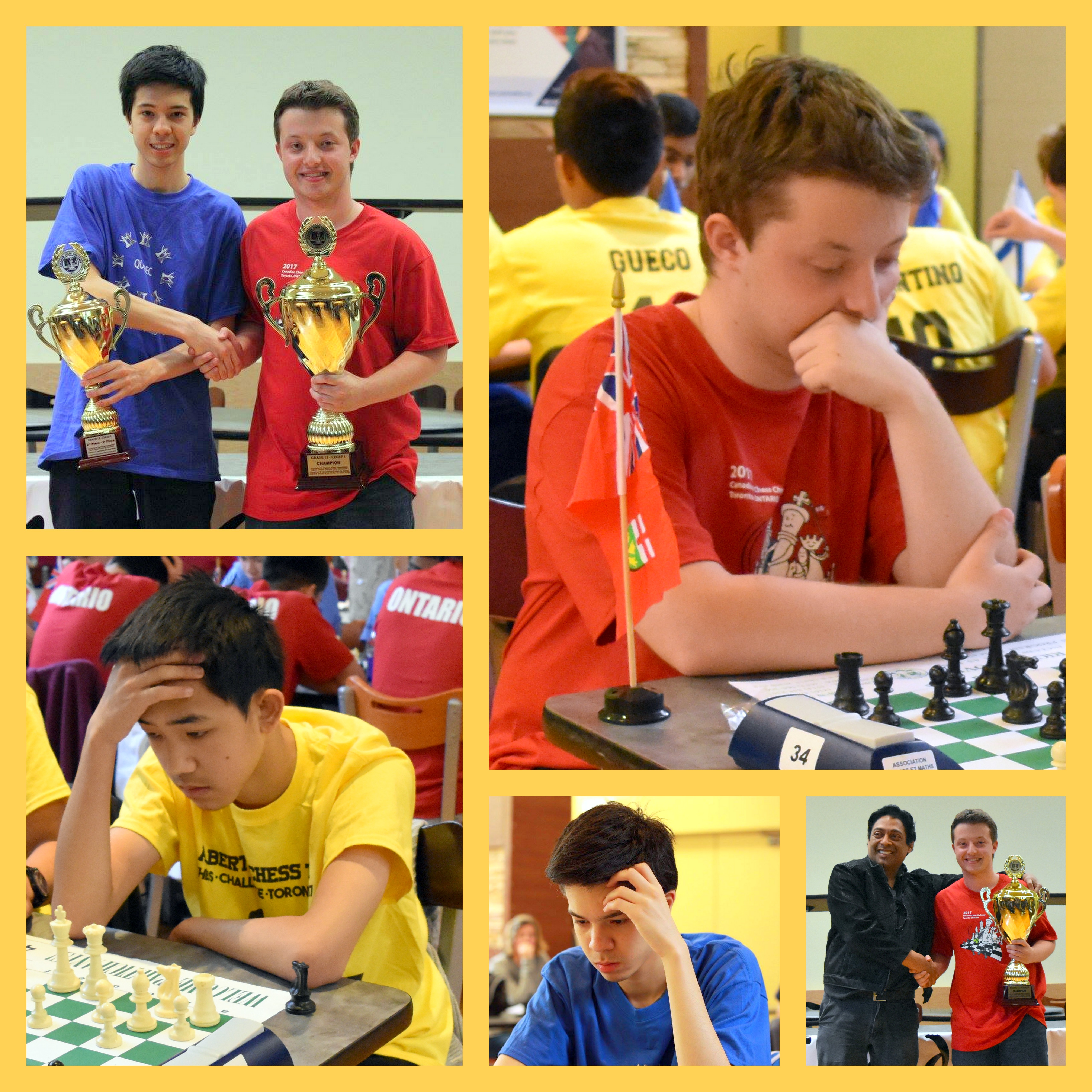 Comments of Leslie Armstrong, Ontario team captain: I'm very proud of the way my team performed. They are a great group of kids. Tying the record for the most gold medals was exciting as well.

Comments from Lefong Hua, Quebec team captain: The 2017 Quebec Team was very strong, but Ontario was once again superior. We lost to Ontario 9-3, and we have no choice but to raise our hats and congratulate them on one of the most dominant performances in recent years. 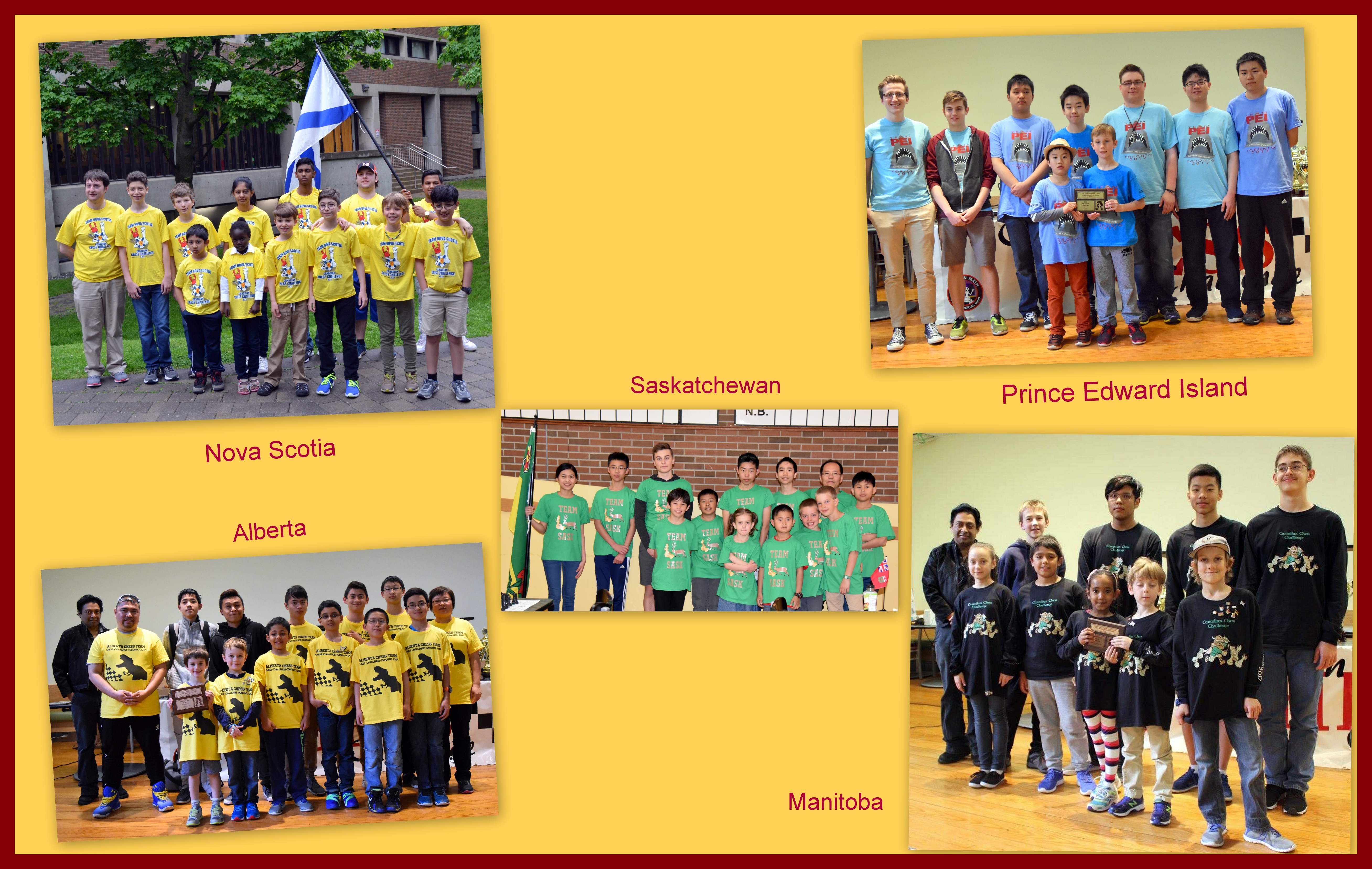 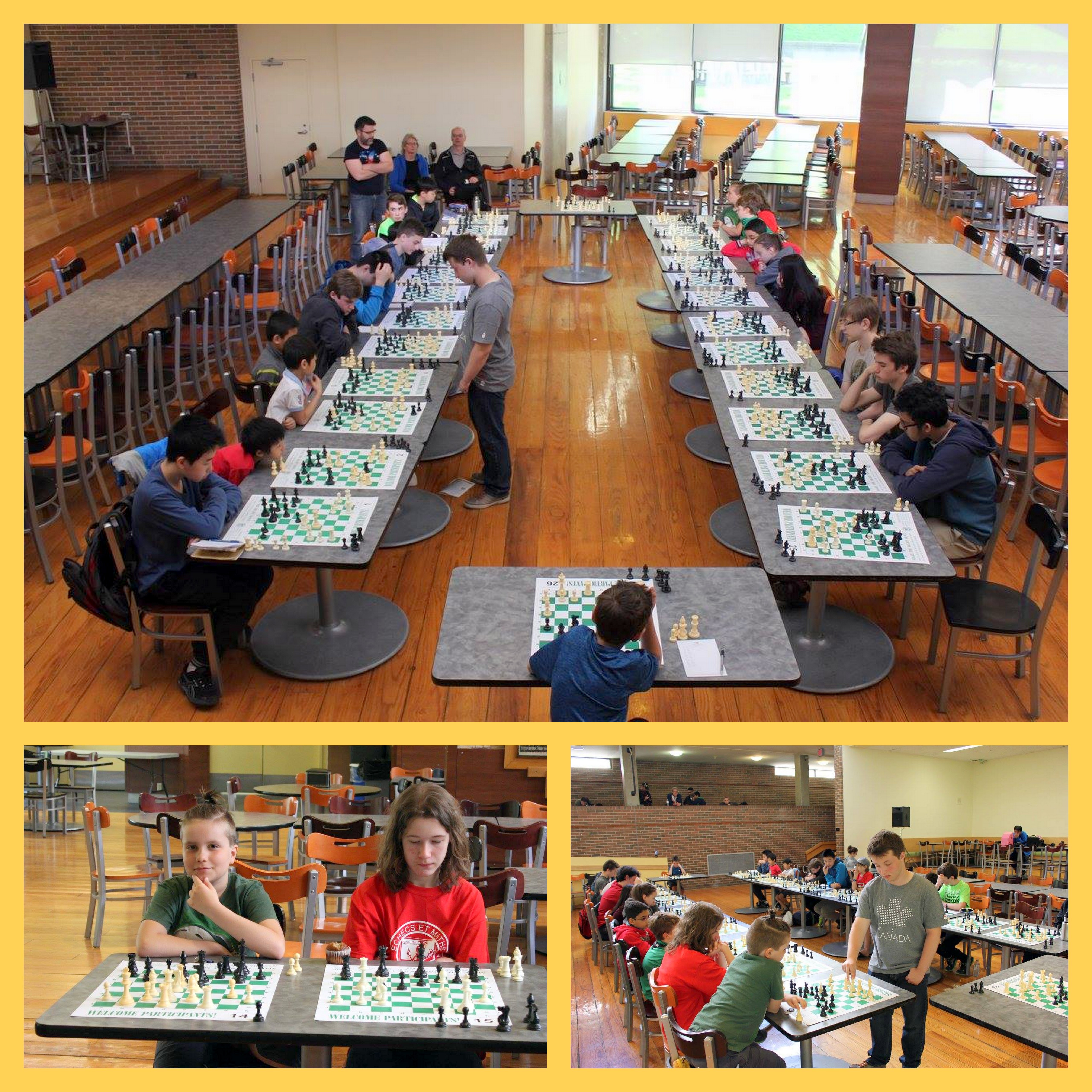 Simultaneous on Saturday at the Westmore Dining Hall

It was the very first time that a Grand Master participated at the Canadian Chess Challenge. For the occasion, GM Razvan Preotu kindly gave a simultaneous. 26 players played against Razvan and only Shawn Rodrigue-Lemieux managed to beat him. David Craciun managed to pull a draw. 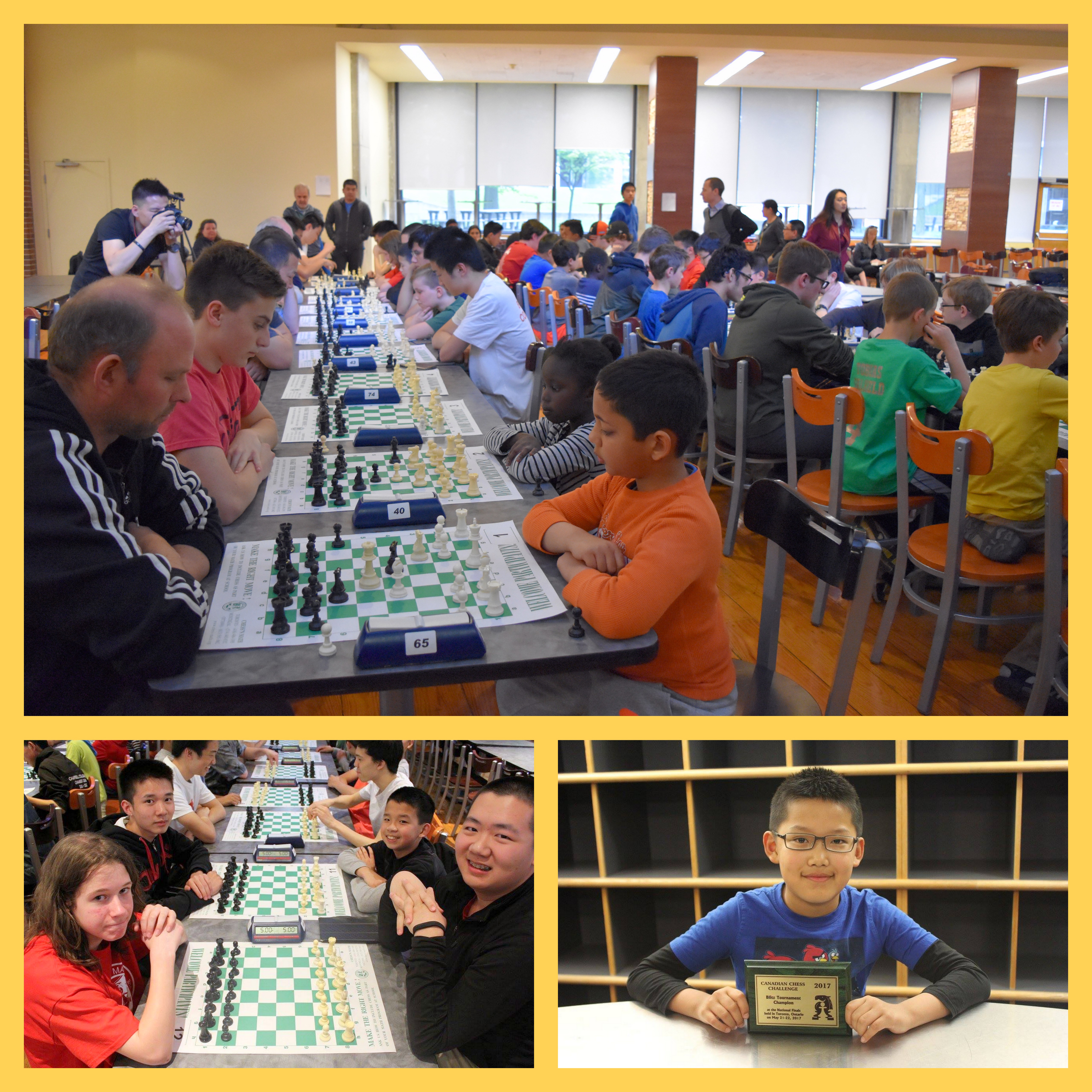 The traditional blitz was also part of the festivities. The young Kevin Liu (QC) won in the U1500. In the open section, Shawn Rodrigue-Lemieux (QC), Olivier Kenta Chiku-Ratté (QC), Qiuyu Huang (QC) and Richard Chen (ON) finished in first place, but Shawn officially won by computer tiebreak. 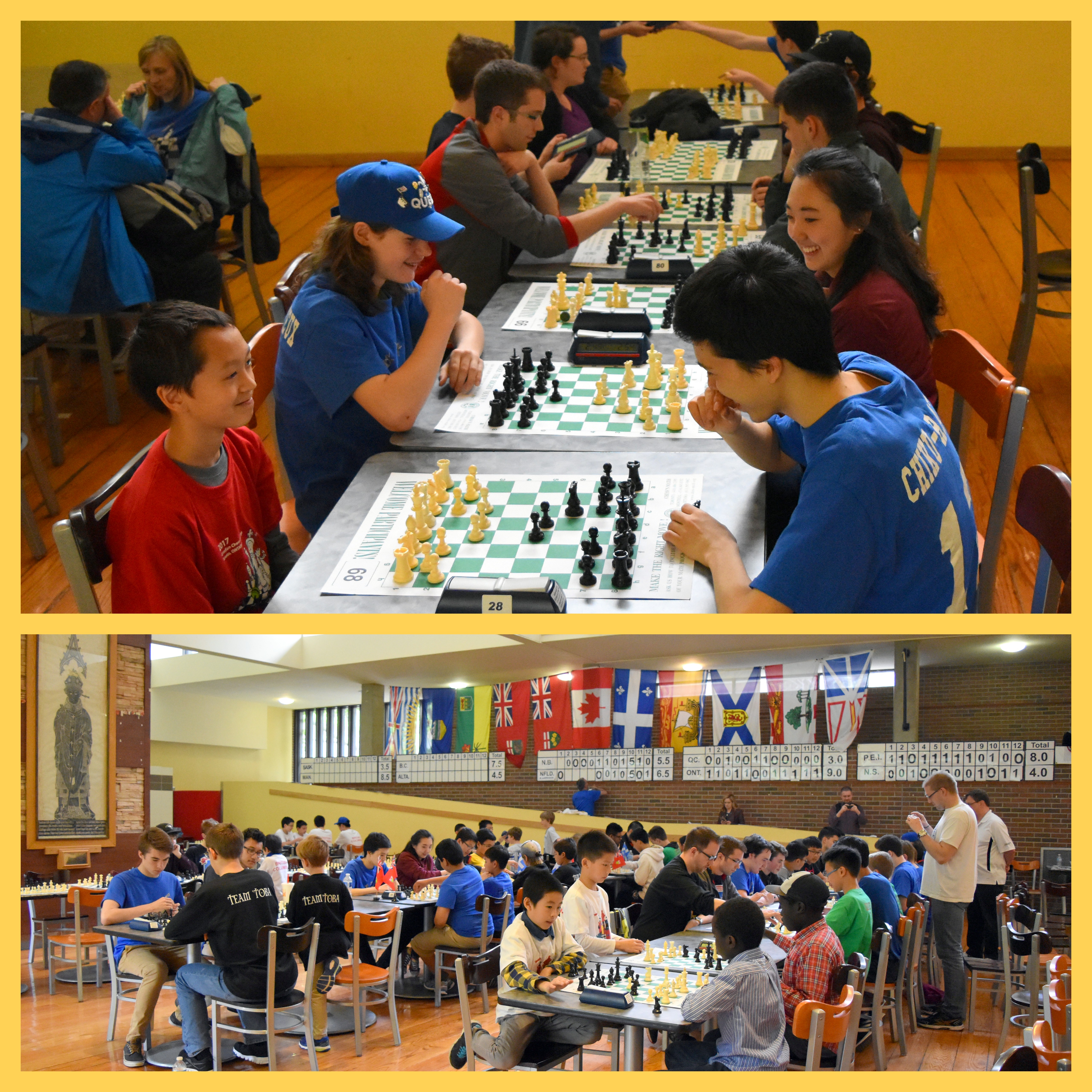 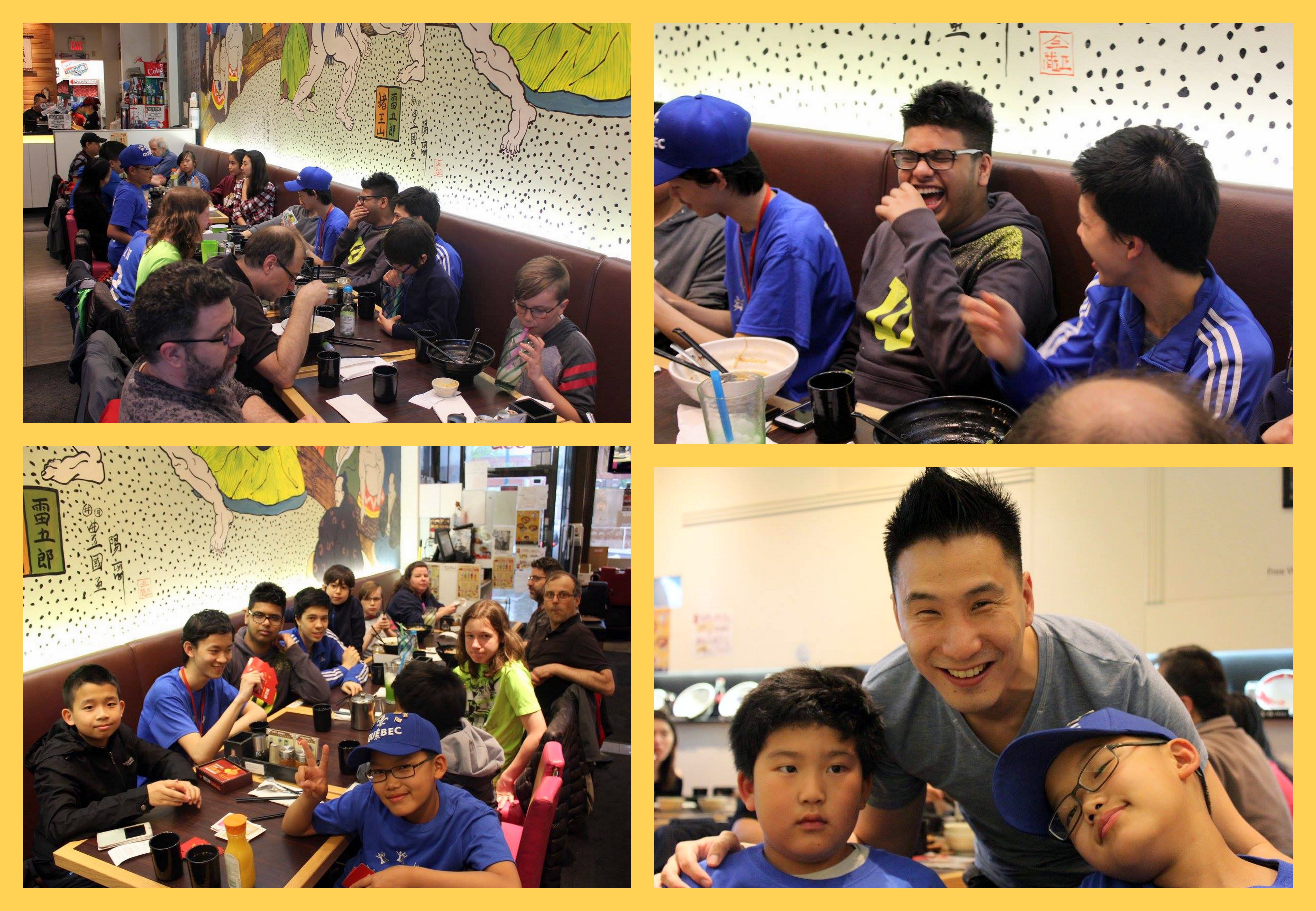 Time to relax after the first day of the tournament. Team Quebec celebrates the birthday of their flag bearer and leader: Olivier Kenta. Beautiful team spirit!

The Quebec team is lucky to have a captain so involved and passionate in Lefong Hua (right bottom)! It was his 12th year as captain. 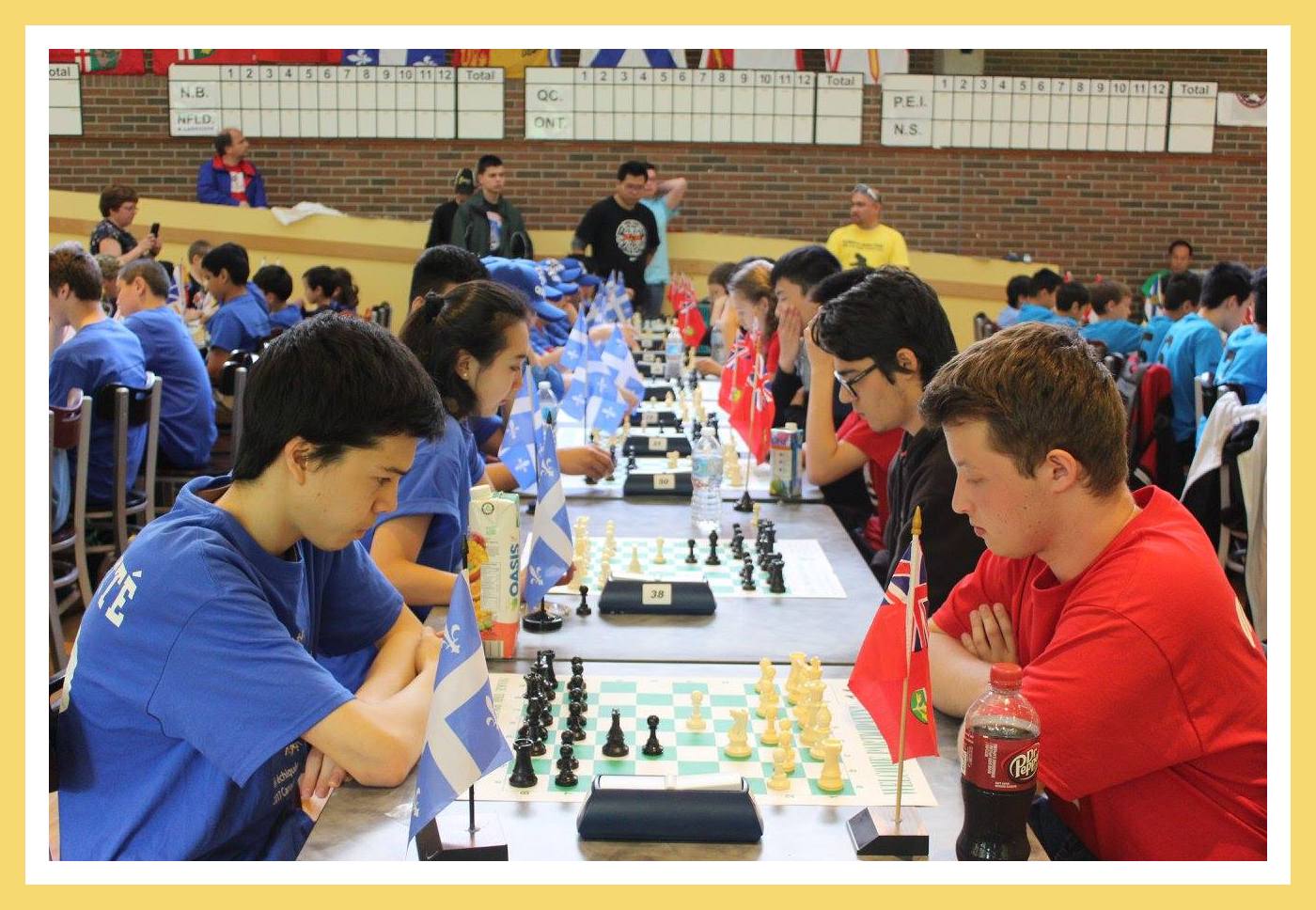 ​FM Olivier Kenta Chiku-Ratté against GM Razvan Preotu in the last round.

​Thanks to these two great players and much success for their future! 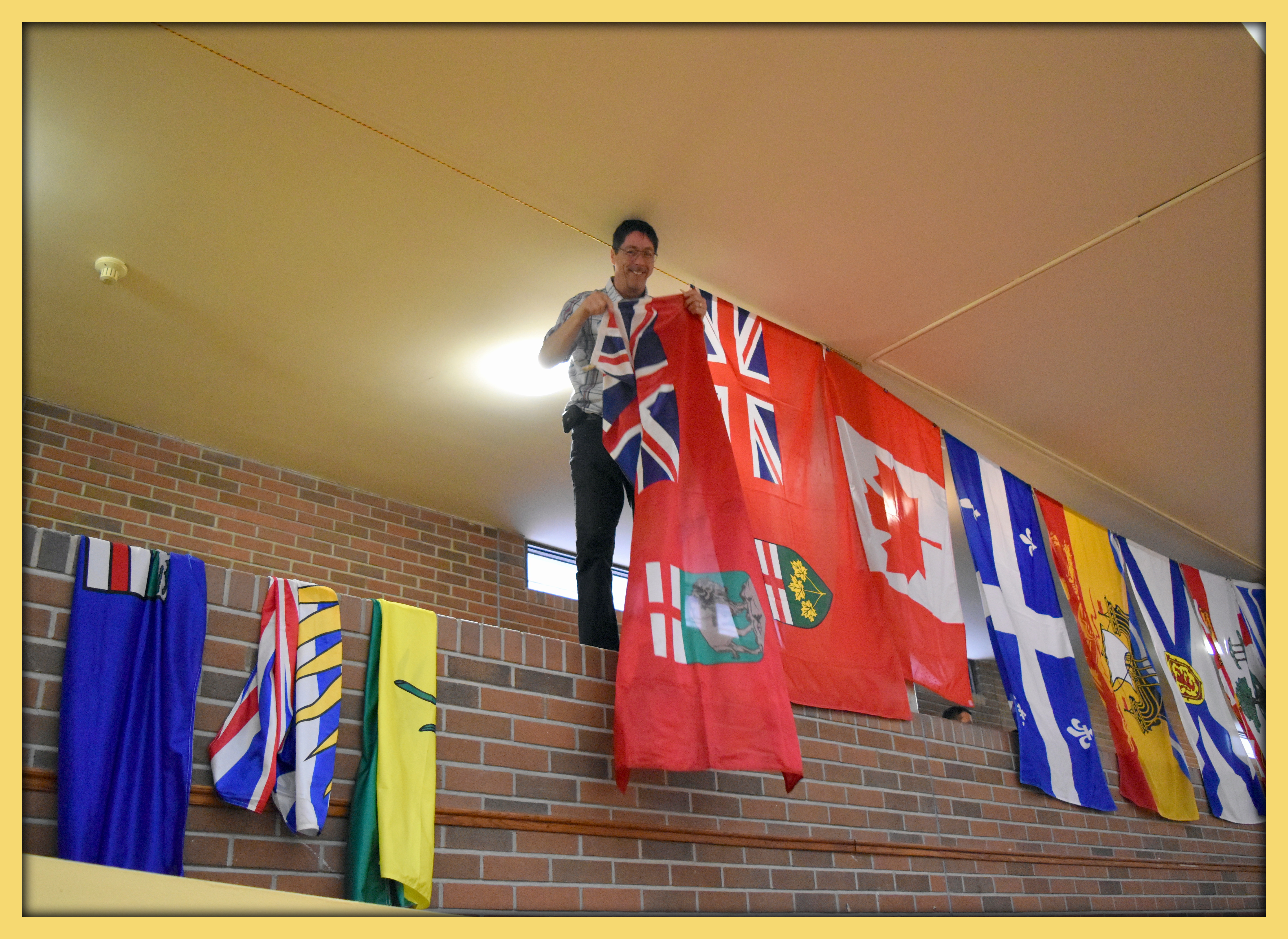 The Chess'n Math Association thanks you and invites you in Newfoudland for the Cananadian Chess Challenge 2018!

Scholar's Mate and Échec au Roi would like to thank Victoria Doknjas and Lefong Hua for their beautiful pictures!

For more photos of the Canadian Chess Challenge, see:

- Photos from Victoria Doknjas on the CMA's Facebook page